As usual when leaving town a slightly late start, first waffles at Huddle House, then hiding from storms for an hour or so before I headed off up the hill with Older Dog. After a few steep miles where the path resembled s stream in places we stopped at the first shelter for lunch and to let our shoes dry out. 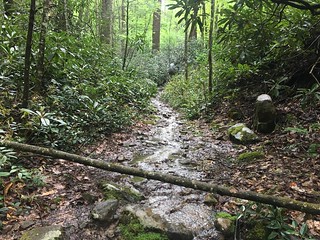 The rest of the day was uphill too ending at Beauty Spot a large grassy clearing in the summit of a hill.

A day of pointless ups and downs of various sizes starting with a spruce covered Unaka Mountain. 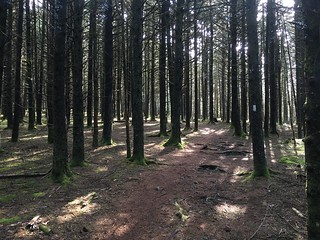 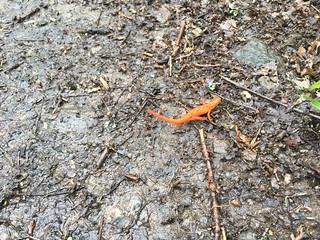 A steep start to the day featuring a small peak followed by a 2,000 foot climb up grassy balds offering views of the surrounding mountains. Just after passing Jane Bald I came across another Brit from Manchester area. 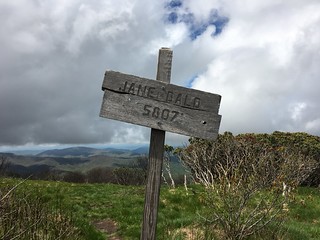 Overmountain shelter is an old barn converted in to a hiker shelter and is huge by shelter standards - sleeping around 20. I camped in the large grassy field just before the shelter with a great view down into the valley with T-Rex, Chef Ducky and the guy from Manchester (who’s name I promptly forgot). Unfortunately the following mornings weather was rubbish so no nice sunrise pictures. 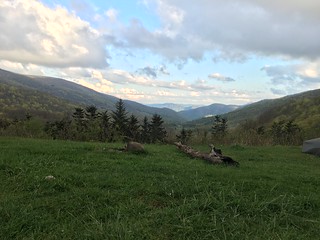 Long day with a 3 hour detour in to the small town of Roan Mountain for BBQ pulled pork and a few extra supplies (otherwise it was porridge for lunch). I wasn’t originally planning to head in to town but I bumped in to Duchess about half a mile from the road and she was looking for someone to hitch with and the mention of real food was enough to convince me. 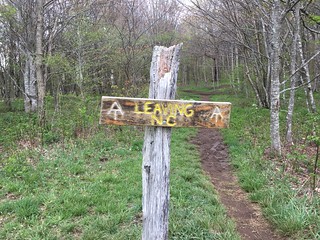 On coming out of Roan at about 4 I was surprisingly full of energy and made it to the campsite I was originally planning to stop at by about 7:30 in a beautiful spot just by the Elk River. On a warmer day I’m sure a dip would’ve been tempting. There I bumped in to T-Rex, the only hiker in camp who wasn’t already in bed. 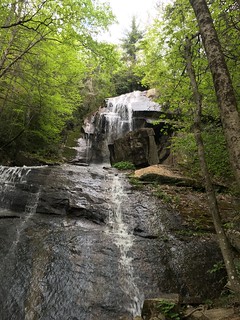 Less than a mile in to the day I passed the 400 mile point, followed by a slightly shorter day than planned as it started hailing just as I was approaching a shelter. Which, a short while later, turned in to an all night storm and torrential downpour. Also a cold night as it dropped down to only a few degrees. 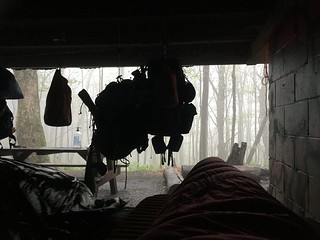 A late start while waiting for the overnight storms to clear up and hoping it would warm up (it was still only about 5 or 6 degrees by 9am). Once I’d eventually made it out of my sleeping bag it was a pretty easy day and I passed Laurel Falls, a huge waterfall, just after lunch hiking with T-Rex. T-Rex stopped about a mile or so after the falls at a shelter and I headed the additional mile and a half into the tiny town of Hampton. 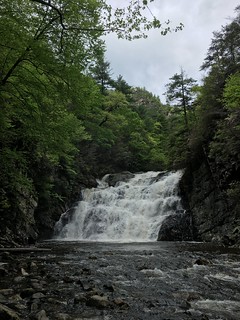 Hampton looks like it used to be a nice town, unfortunately now the derelict bar, restaurants and shops make it feel unloved. After wasting time walking to the far end of town and back looking for a motel or similar, and getting distracted by Dunkin Donuts, I spent the night at Braemar Castle Hostel - named after the Scottish Castle. It was the cleanest hostel I’ve stayed in since the start and at $25 for a large private room not a bad price either.

Another late start out of town followed by straight up and down a 1,700 foot mountain. 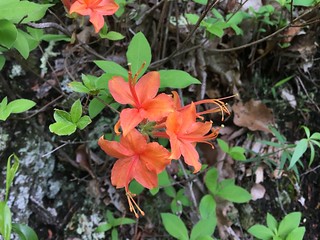 Next up was Lake Watuga a large lake used by the locals for fishing and other watery stuff. By pure luck I arrived while two lovely ladies were offering out hot dogs and fresh fruit to hikers which was all the excuse I needed for a long lunch. 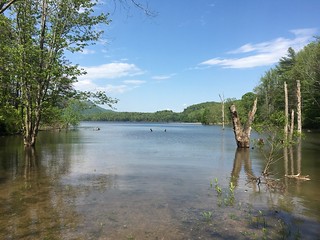 Once I eventually motivated myself to continue it was on up the hill where an imminent thunderstorm made me pitch my tent for the night.

A simple day of ups and downs in glorious sunshine. A few miles before the end we came across a group called Riff Raff who had set up a giant trail magic with a small village of tents and multiple gazebos. They were even offering bloody mary’s or “beer” to people as they arrived along with chilli and hot dogs. 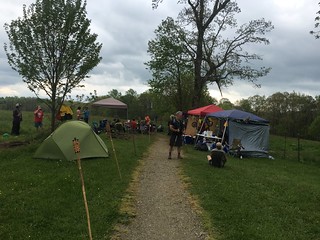 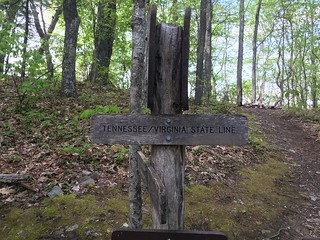 My longest day so far but with a shower, proper food and beer in sight that was all the motivation I needed. The first half of the day was a surprisingly tiring but gentle uphill for 12 miles or so, followed by a long downhill in to town. Once I got in to town I checked in to The Place, a pretty basic (but functional) hostel run by the local Methodist church in return for a donation. 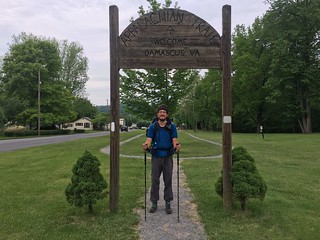 I think this was my latest start at 2pm. I headed out of town with Pirate knowing we had three nights to cover 40 miles so there was no need to hurry. At the shelter I met an Aussie, Wanjana, who I hiked with on and off for the next few days in to Damascus. 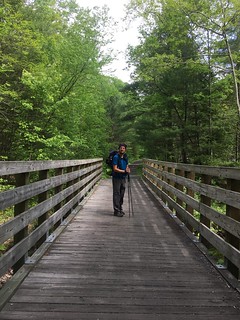 A fairly hard day that was all uphill. At the end of the day Pirate carried on for another few miles as he wanted to get in to Damascus Thursday afternoon.

For anybody reading this who hasn’t yet hiked this section: the water source is rubbish and back south along the A.T. I’d grab some water on the way if you’re stopping here. 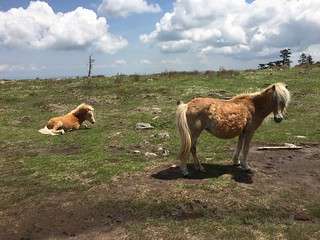 A lovely day mostly spent hiking over grassy areas, the highlight of which was Grayson Highlands State Park. The park has wild ponies and long horned cattle to keep vegetation down, the ponies are really friendly especially if they think you’ve got food, you just have to watch to make sure they don’t eat your pack. Entering the park brought the 500 mile point, helpfully spelt out on the trail in stones by another hiker. 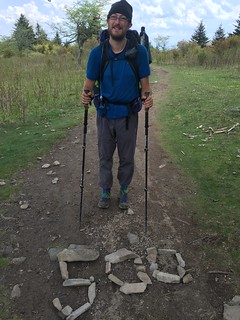 A very short day of walking, just 1.7 miles from the shelter down to a road the outfitters in Damascus had recommended for hitching. After 10 minutes we’d only seen one car so ended up walking about a mile and a half towards a campsite in the hope of finding more cars.

After about an hour a guy in a pickup truck came along and offered us a lift part way as he was visiting his brother, as luck would have it the brother was out so he went miles out of his way any too us all the way in to Damascus.

The big upside of getting in to Damascus is I was able to have a chat with Joe from ZPacks and show him my faulty pack, he instantly said he couldn’t repair it here and offered me a new one so I’m now the happy owner of a brand new backpack and very impressed by their customer service.

A simple day in town with something like 20,000 extra people (only 600ish people live here). I spent most of my day trying to win free hiking gear in raffles or catching up with hikers I’ve met before including the bunch I hiked with for a while: Cade, Reboot, Kiba, Link and Woobie.