I ended up taking two days off at Fontana rather than the planned one as the other guys I’ve been hiking with ended up arriving a little later than expected bringing along a new member, Link and his dog Kid (the most relaxed dog I’ve ever met - she even ignores food).

It turns out Fontana isn’t the most exciting place in the off season, the pools were closed and the cheaper restaurant only opens weekends. So we ended up doing a lot of sitting around, drank a few beers and watched the campfire.

Another late start coming out of town, but one with a great view. The resort shuttled us for to the dam were we left off a few days earlier, and we then walked across Fontana Dam. 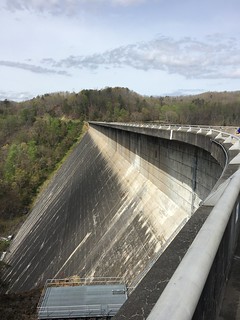 Once the Dam was out of the way it was a pretty level mile and then on on to the big challenge of the week, a The Great Smoky Mountains. As luck would have it delaying staring the Smokies by a day brought us beautiful clear weather rather than the previous day’s grey. 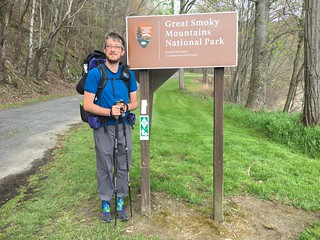 The smokies get off to a steep start with a rise of a little over 2,000 foot over the next 2.5 miles. The steep ascent tired us out quite quickly so we were all glad to get in to the campsite after a relatively short, but steep, 6 miles.

A lovely sunny day for hiking with a touch of wildlife thrown in. After hearing woodpeckers on and off fur the last few weeks I’ve now seen one too. It was a red-headed woodpecker slowly making itself a hole, and then later in the day I saw a turkey wandering around the valley below the trail. Unfortunately no photos as they were too far away.

A deer was eating from a bush as we left the shelter and didn’t seem to care that Cade and I were watching. 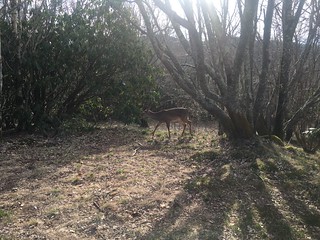 It was lovely and sunny again with lots of up hill stretches. Tempted to give up for the day half way at Derrick Knob Shelter but glad I pushed on as it made the steep climb up to Clingmans Dome much easier. Also got to pass a minor milestone - less than 2,000 miles of trail left!

A big trail milestone in this section, Clingmans Dome is the highest point on the whole trail. It’s topped by an observation tower peaking at 6,667 feet, giving great views of the surrounding Smoky mountains. Just after the mountain is the 200 mile mark. If your on the A.T. heading to Clingmans I can recommend avoiding the shop, it’s 0.5 miles down a steep hill and only sells lukewarm water and overpriced chocolate. More importantly you then have to walk back up the hill. 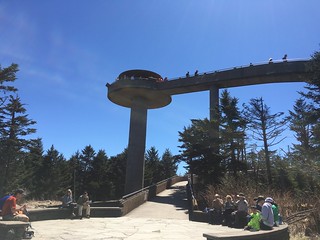 After spending a few hours there it was just a few miles downhill in to the shelter which had dome lovely camping spots under the trees. Not much wildlife but I did see a woolly bear bug. 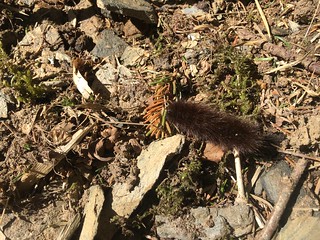 This was a really nice days hiking as we were passing through a wood of fir trees all day providing a really nice smell and welcome shade.

A early start to make sure we made it to Newfound Gap in time for the free NOC shuttle and a fairly easy 4.5 miles of mostly downhill hiking. In the end we got there about 45 minutes early, just in time for a free shuttle in to Gatlinburg from the First Baptist Church.

Gatlinburg is a southern tourist town. Everyone here is a tourist so it’s full of restaurants and shops selling tat.

On the plus side the hotel was clean and it was great to have a shower after 5 days on the trail. I had the thickest pancakes I’ve ever seen for breakfast. 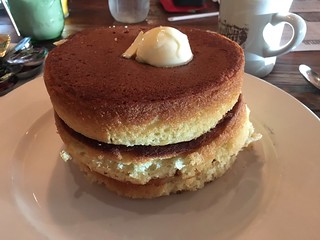