Days 68 to 76: Pearisburg to Troutville

After a couple of people mentioned it I realised I forgot to mention I had a trail name a few weeks back. On the trail I’m now Pancake. I was sitting in camp one night with some Americans and we were talking about food and it sort of stuck.

My original plan was to head out about lunch time but when I popped to the post office my letter hadn’t arrived but the lady at the post office said to expect it tomorrow. The hardware stores gas delivery also hadn’t shown up so I ended up staying a second night.

After grabbing a quick breakfast I had to wait for the post office and hardware store to open. The post office was no hassle at all, I finally had my credit card - thanks Mum. However by 10:30 there was still no sign of the hardware store opening, luckily a guy just arriving in to the motel had a spare gas canister and gave it to me so I was able to head off at about 11.

It was s really hot day with little water so by the time we made it uphill to the campsite after 8.5 miles both 007 and I decided to call it a day. The fact that it was the last water for 11 miles making the decision easy.

Back to a normal length day, the first half looked nice and flat in the guide but it lived up to its nickname of the book of lies as the entire morning was up and down over rocks.

That afternoon we passed The Captains - a local guy who lets hikers camp in his garden - which is reached by a swing seat on a zip wire over a river. He even keeps a fully stocked fridge of fizzy drinks for hikers to help themselves to on his back porch.

From the Captains place it was less than three miles too the shelter, but they were some amazingly steep miles making for a significantly later than expected finish. 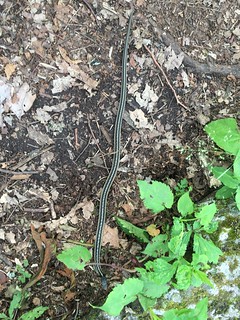 Having walked uphill the night before we were already up by the ridge line which started with a gentle climb for a few miles and plenty of loose rocks.

After a steep descent I stopped at War Spur shelter for lunch where some hikers who’d stayed at The Captains the previous night were cooking fish over the fire.

A long ascent and descent filled the afternoon bringing me to Laurel Creek shelter around 5. 007 and I decided it was a little early to stop for the day so decided to head for the next water source just by the VA630 road. A few hours later we get there and run in to Sneaky Pete and Costa Rica who had just hitched to town and back, while chatting a German lady joined us who was also looking to camp there, her name was Moonfire. A very short way up the hill Sneaky Pete found us a campsite and after a small hiccup where I pitched my tent under a dead tree so had to move it we settled in for a wet evening around the campfire. 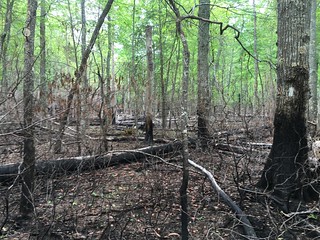 This was the day I lost 007, Moonfire and I got slightly carried away distance wise and he only made it to the previous water stop. 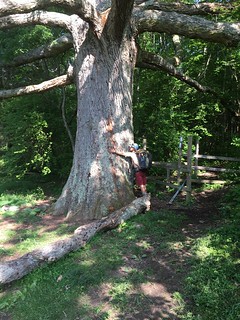 The day started with a reasonably short but steep uphill past Keffer Oak - the largest Oak tree on the southern AT - followed by flat looking terrain, however for the next few miles it was solely walking along a rocky ridge line. I stopped for a snack at the fork down to Sarver Hollow shelter and had a chat with Sonja and Bern (a German couple without trail names) mostly about whether any of us could be bothered with the mile round trip for water (we couldn’t). A further 4 miles of walking along the rocky ridge led to some slow going, especially as it was a long way down if I fell. At the end of the ridge section is a sign letting you know the ridge is the Eastern Continental Divide. 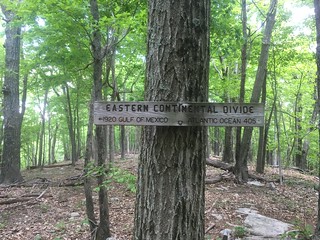 I made it to Niday shelter for about 3 and after spending a while pondering what to do Moonfire mentioned she was heading another 9 miles to Trout Creek (the only water source other than 2 miles away) which seemed as good an idea as any.

The first couple of miles were nice and easy but then it was up 1,500 foot in 2 miles and high temperatures with little tree cover. Luckily some kind soul had put a bench at the top of the hill and I just lay there resting for about 5 minutes before attempting the wide flatish trail ahead. 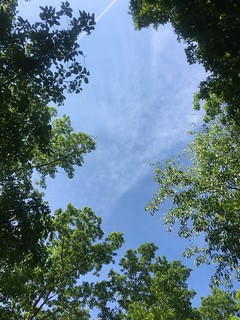 At the end of the flat section was a short side trail to the Audie Murphy monument. Audie Murphy was the most decorated American soldier in World War II and died in a plane crash near that spot many years later. 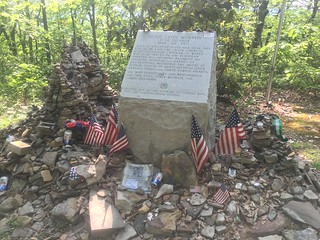 Just as I started the downhill after the monument I ran in to three guys heading south who mentioned there was trail magic at the bottom of the hill. Given the time I was expecting a cooler full of coke or something along those lines but it was still enough for me to speed up my descent. Just under 4 miles later as I got to the bottom of the hill I could see people sitting around a fire and a gazebo with grill, seats and small crowd of hikers. Under the gazebo I discovered Grandma and Old Goat doing large scale trail magic. They were giving out hot dogs, soup, sandwiches, soda and beer to any hungry hikers who came near. They’re a lovely retired couple whose daughter hiked the trail a couple of years ago and ever since they’ve been doing trail magic a few times a year. This time they’d been there since Tuesday feeding about 50 hikers a day. 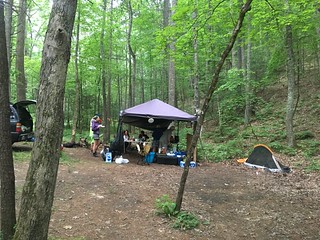 Once she heard my trail name Grandma mentioned they’d be doing pancakes for breakfast which was perfect as I’d planned to camp there anyway.

The day got off to a slightly later start than planned as just as I was about to leave camp I was offered more breakfast - scrambled eggs this time - as a follow up to my first breakfast of grits and pancakes. The aim for the day was to either reach the shelter just before McAfee Knob or to reach McAfee Knob in time for sunset and then stop at the next shelter.

Once I’d said thank you and goodbye to Grandma and Old Goat the first 5 miles of the day were uphill and it was pretty warm up to Cove Mountain where there was a short side trail to Dragons Tooth. 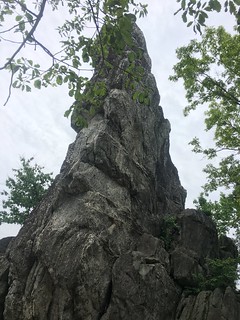 After returning from Dragons Tooth the guide just shows a couple of miles downhill. What it fails to show is that the first half mile or so involved heading down a rocky path with 6 foot drops in places. After that it flattens out to a reasonably pleasant downhill with just a few rocky patches. 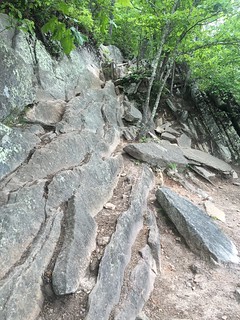 Conveniently the trail crosses a road a few miles after Dragons Tooth and there’s a petrol station 0.2 miles away where I stopped for drinks and ice cream with some other hikers and caught up with Moonfire.

From Catawaba Creek at the bottom of the hill it again looked easy, a short uphill followed by reasonably flat terrain, in reality it was non stop ups and downs and by the time I reached Johns Spring shelter with Moonfire it had started to rain too. That made the decision easy, we headed on another mile to Catawaba Mountain shelter and called it a night. The surprising thing was that Johns Spring shelter was completely empty and Catawaba only had 1 person plus 2 in a tent, I was expecting them to be full of hikers waiting to summit McAfee Knob in the morning.

The highlight of the week was 1.7 miles in to the day, arriving at McAfee Knob. Standing on McAfee Knob is probably the most common photo on the trail, everyone sits or stands on the same bit of rock and has their photo taken from the left (Kathadin would be more popular but less people reach there). As you can see I’m highly original and have the same photo too 😀. 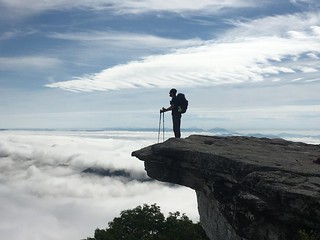 When I reached McAfee Knob with Moonfire the valleys below were full of clouds which added some real atmosphere to the views, and made you realise just how high up the edge was. An up side of camping so close the night before was we beat all the day hikers so it was lovely and peaceful up there. After about 45 minutes Moonfire headed off (she wanted to get in to town) and I just sat there enjoying the view for almost an hour more. 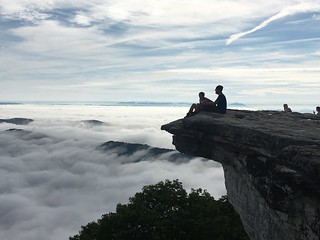 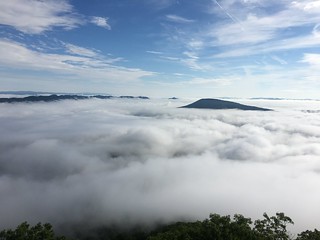 After McAfee Knob I headed less than a mile downhill to Campbell Shelter for an early lunch as the next stretch of trail had seen some unwelcome bear activity. Hanging bear bags of food were taken 3 days on the run as was somebody’s pack and people were being asked not to eat or sleep anywhere near Lamberts Meadow shelter.

With the closed shelter my original plan of a very short (8 mile) day to give 007 a chance to catch up went out of the window so I did the ups and downs past Tinker cliffs and the shelter to what the trail maintainers called a temporary campsite. In actual fact it was a fairly steeply sloped road with only a couple of flattish spots but it was my home for the night. 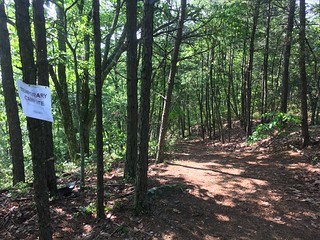 A short day heading in to town. Troutville and Daleville seem to merge together so I’m not quite sure which one I’m actually staying in. I woke up late, had a slow leisurely breakfast and took my time coming down the hill in to town where I met up with 007 to share a room. The landmarks in the guidebook weren’t too exciting as they’re all power lines.

Over the last few days all the skin has rubbed off my right heel so I’m taking an extra day off to let it heal up. I bought some shorts as my trousers were both too big and too warm - the shorts have 4” smaller waist - and soon food and then sat around by the pool all day.