Winding Stair Gap to the NOC

Day 16: Day off in Franklin

We caught up with Whoobie and Kiba last night and went for a reasonable Japanese. The day started off with chores like resupply but we bumped in to another hiker who mentioned free food. Unable to resist the pull off beer and free food we all headed over to Lazy Hiker Brewing Company tried a couple of their craft beers and ate a delicious lunch provided by Nantahala Hiking Club - thanks guys!

At the lunch we bumped in to Stonebridge who’d spent the previous night at a hippy commune claiming to be a hostel. To say he wasn’t impressed would be an understatement so he ended up spending the second night in town on our floor.

A slightly late start after finding pretty much everywhere in Franklin is closed on Sunday, we rejoined the trail at Winding Stair Gap. Our shuttle driver had warned us all not to miss the view at Siler Bald.

A few pretty steep uphill miles brought us out to a meadow with a clear path off to the left, this lead up Siler Bald. The Bald itself was a pretty steep climb up a grassy hill but it was worth the effort, rewarding us with 360 degree views of the surrounding mountains. 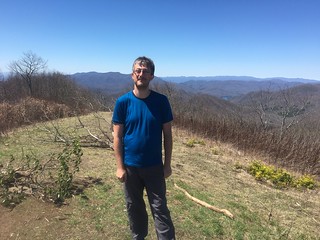 A quick stop for lunch and onwards we went first down nearly 1000 foot and then back up the same.

Our plan for the night was to head for a campsite just after Cold Spring shelter, but when we got the we were out of flat spots, luckily we’d just passed another suitable spot digit a peaceful nights sleep away from everyone else.

A couple of miles in to the day we headed up Wayah Bald which has a old stone fire tower on the summit, this gave excellent views of the surrounding mountains including the path up Siler Bald from the day before. 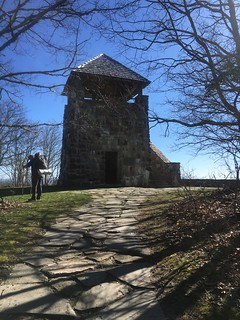 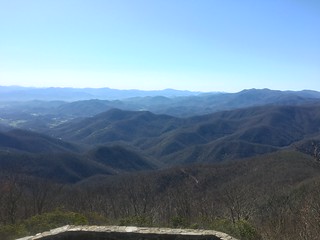 A steep descent and a decent climb most of the way back up brought us to Cold Spring shelter. It was tiny and smelt of wee, so it didn’t take much thought to head a further 0.1 miles up the trail to a campsite instead. This turned out to be a really fortunate decision as we found a camping spot with a great view out over the valley and to more mountains beyond. The only down side was the 5000 foot elevation combined with freezing temperatures and 30+mph wind made for a fairly cold and noisy night.

The day started off with a steep knee-jarring 1200 foot descent followed by an 800 foot rise, much of it through green tunnels of rhodedendrons, up to Wesser Bald. 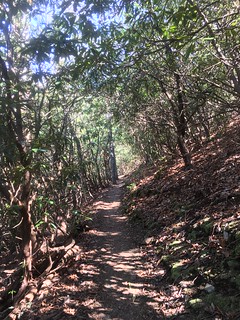 Wesser Bald is topped by a steel observation tower - think of the bottom third of an electricity pylon - again giving amazing views of the surrounding mountains. 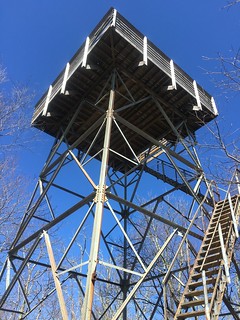 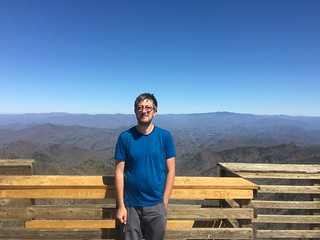 The trail then descends almost 2000 further feet, this second descent was particular pleasant as in places the trail suddenly turned in to a 5 foot or so drop of sheer rock, in others it had washed away completely leaving you to skirt the top of a few hundred feet of very steep drop.

We spent the night in the shelter to avoid too much packing the following morning in anticipation of breakfast at the NOC.

A super short day of hiking (a nero in hiker speak) brought us in to the NOC in time for breakfast. Pancakes, sausages and eggs were so much better than instant porridge. We then spent the day lounging around and found laundry until Kiba and Whoobie arrived for dinner. Quickly followed by more lounging and a night in a very basic wooden cabin.

Off to a bit of a late start after enjoying the Holiday Inn Express breakfast and grabbing supplies it was a day of pointless ups and downs (PUDs) carrying some extra fresh food.

At the end of the day we camped behind Plumorchard shelter and cooked beef and mushroom kebabs over a fire with vegetable rice making us the envy of the rest of the camp. 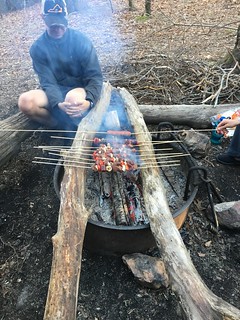 4.4 miles in to the walk we passed our first milestone, the Georgia, North Carolina border. 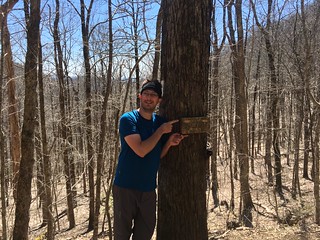 Plenty more pointless ups and downs and once we made it to the shelter the camping area was full. Backtracking a short way up the trail found us an ideal sheltered spot for tents and a great view down in to a valley for sunset. 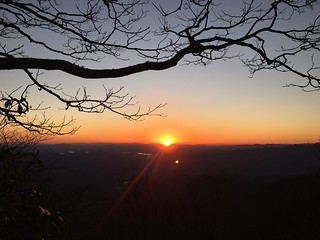 The plan was to camp at Beech Gap after about 9 miles, but on the way we’d heard thunderstorms were expected overnight so hiding away in a shelter became much more appealing. Kiba still had her tent up and Whoobie hadn’t surfaced when Cade and I had left at about 9 and we were expecting them to catch up all day - they didn’t. 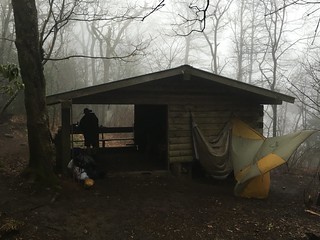 In the end the thunder never happened but we did get plenty of wind and rain, and Kiba and Whoobie didn’t make it either, we’ve heard from other hikers they stopped at Beech Gap.

Last night was my first night sleeping in a shelter - I’ve stuck with my tent up to now - with rain drumming on the tin roof and people snoring just 6 inches away I didn’t get much sleep. It was great though this morning not having to deal with a wet tent. 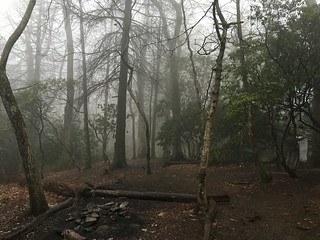 The day started with a thick fog which hung around all day and the weather forecast was rain and thunderstorms from early afternoon onwards, so it seemed a good idea to keep it short. We almost made it to the shelter before the storms but the heavens opened on the way up Albert Mountain.

Luckily Cade and I were the second and third in to Long Branch shelter at about 1pm so we got comfy spaces upstairs before everyone else arrived (as comfy as a wooden floor can be anyway). Within a hour the shelter was over full and the heavens had opened.

In our hurry to outrun the rain we missed marking today’s milestone, 100 miles on the trail. Kiba and Whoobie caught us up at the shelter late afternoon.

After another night of poor sleep in the shelter, this time we did get some lightning, I was up just after 7. A quick breakfast of coffee and porridge and we were off, or at least Cade and I were, Keba was waiting for the rain to stop and Whoobie hadn’t surfaced.

Around 800 foot down to start with and then up over an unnamed, but surprisingly difficult, peak before a long downhill run to Winding Stair Gap just before midday. As luck had it a Budget Inn shuttle turned up a few minutes later and took us in to Franklin - a stereotypical southern town - and somewhere to stay the night.

A little confusion later - the owner had one opinion of free rooms, the staff had another - we were checked in and off to a 50’s style diner for lunch.

Day 8: Day off in Hiawassee

So, the plan for today was to pick up a few bits in town and then head back to Unicoi gap and continue up the trail. However, as with all good plans, things didn’t work out as expected. Once we’d finally got ourselves sorted with food etc. we followed Cade and Kiba up to the Top of Georgia hostel (they were staying there) so Ali could pick up a warmer sleeping bag. The combination of shuttle, shopping and general procrastinating took that long that we gave up and stayed the night too. A shuttle back in to town for dinner and we were all happy.

The hostel served breakfast of coffee and cake at 7am, so by 9 we were back at Unicoi Gap ready to continue the trail, all a little apprehensive after looking at the elevation profile for the day.

We had a few light showers early afternoon and with storms forecast we set up camp after about 10 miles, luckily the weather held off until about 9pm so we had plenty of time to eat, chat and lounge around by the fire.

The day got off to a miserable start, after raining all night it was still drizzling and pretty misty. Nobody felt like hanging around for breakfast so after a quick snack we headed off, leaving Whoobie asleep in his tent. 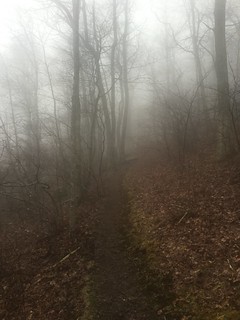 Four or so hours later we got to Dicks Creek Gap, Cade and Kiba both needed to collect parcels from Top of Georgia hostel do we made a quick detour down there. Once sat down out of the rain a comfy bed and shower were just too tempting so back in to town we went for another night at the Holiday Inn Express.

After a second night at Neels Gap, again with a lucky cabin - this time thanks to Ryan - with 2 other British guys, Rob and Ali (Eucalyptus farmers from Devon). With a much rested knee it was time to hit the trail again.

The next shelter was only 5 miles a bit short for a day so we carried on and after 7.5 miles we stumbled across a couple of guys at a campsite. One a completely loopy local who was drinking beer non-stop and entertaining the rest of us, and the other an aspiring hiker who’d spent about $100 at Walmart for his entire hiking kit. We’d also bumped in to group Americans during the day, Cade, Keba, Scattershot and another guy. 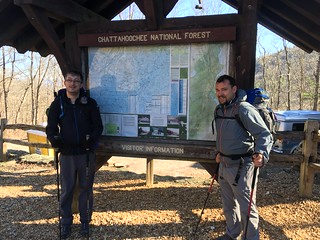 The 7 of us who’d camped together the previous night carried on hiking together aiming for about 8 miles, but all we could find were exposed campsites with howling gales so we carried on, eventually finding a campsite after about 11 miles.

The weather forecast for tonight was thunderstorms so a night in town was in order giving us a nice easy day. Only 3.5 miles although there wasn’t even a single flat metre. Luckily at Unicoi Gap a group had set up some Trail Magic. I had one of the best burgers ever, along with Sprite, cake and crisps 😋. Then a shuttle in to town and a soak in the Holiday Inn Express hot tub - it’s a hard life. 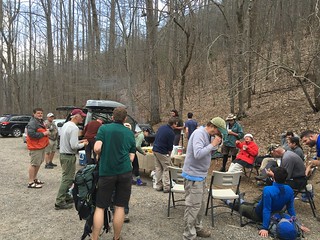 After a goodnights sleep and breakfast at Hiker Hostel I decided to skip the 8 mile aproach trail up Springer Mountain and instead was shuttled up to a carpark about a mile below the peak (the +1 above). 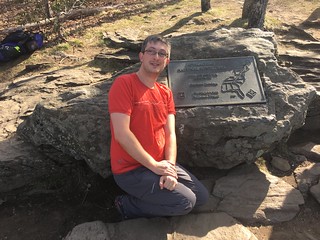 A further 8 miles of ips and downs brought me to Hawk Mountsin Shelter, a surprisingly busy place to spend the night, also my first attempt at pitching my tent.

A reasonably early start meant the planned 8 miles to Goovh Mountain Shelter were over by about 12:30, so I pushed on for an extra 5ish miles to Woody Gap, were 5 of us found a nice sheltered spot to camp. On the way I stumbled scross my first instance of trail magic, some guys who’d thru-hiked before were handing out beer at Gooch Gap - a much welcomed break from walking. 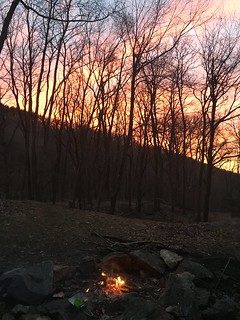 Neels Gap has hot food, showers and laundry, and luckily for me, one of the guys I camped with at Woody Gap got here nice and early and bagged us the last cabin :) A fairly hard 11 miles to get here, Blood Mountain at 4,457 foot stood in the way. 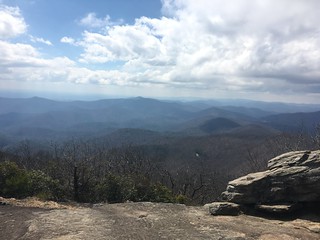 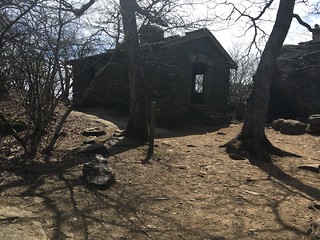